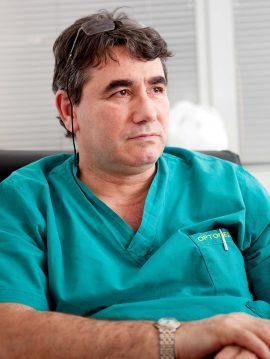 Dr. Hristo Mazneikov is an orthopedic traumatologist with exceptional experience and innovative approach in the treatment of traumas and orthopedic diseases.

In 1993, together with Dr. Mazneikova, they established the Saint Sofia Medical Center, and in 2004-2006 they built and opened the Hospital Saint Sofia.

In December 2009 they opened the Saint Sofia Medical Center – Lyulin.

In 2008, Dr. Hristo Mazneikov is the first Bulgarian orthopedist to become a member of the World Organization for Arthroscopy and Sports Traumatology ISAKOS, where he participates in the Scientific Committee of the Organization.

He has authored and co-authored numerous journal articles, lectures and guest lectures at numerous national and international congresses.